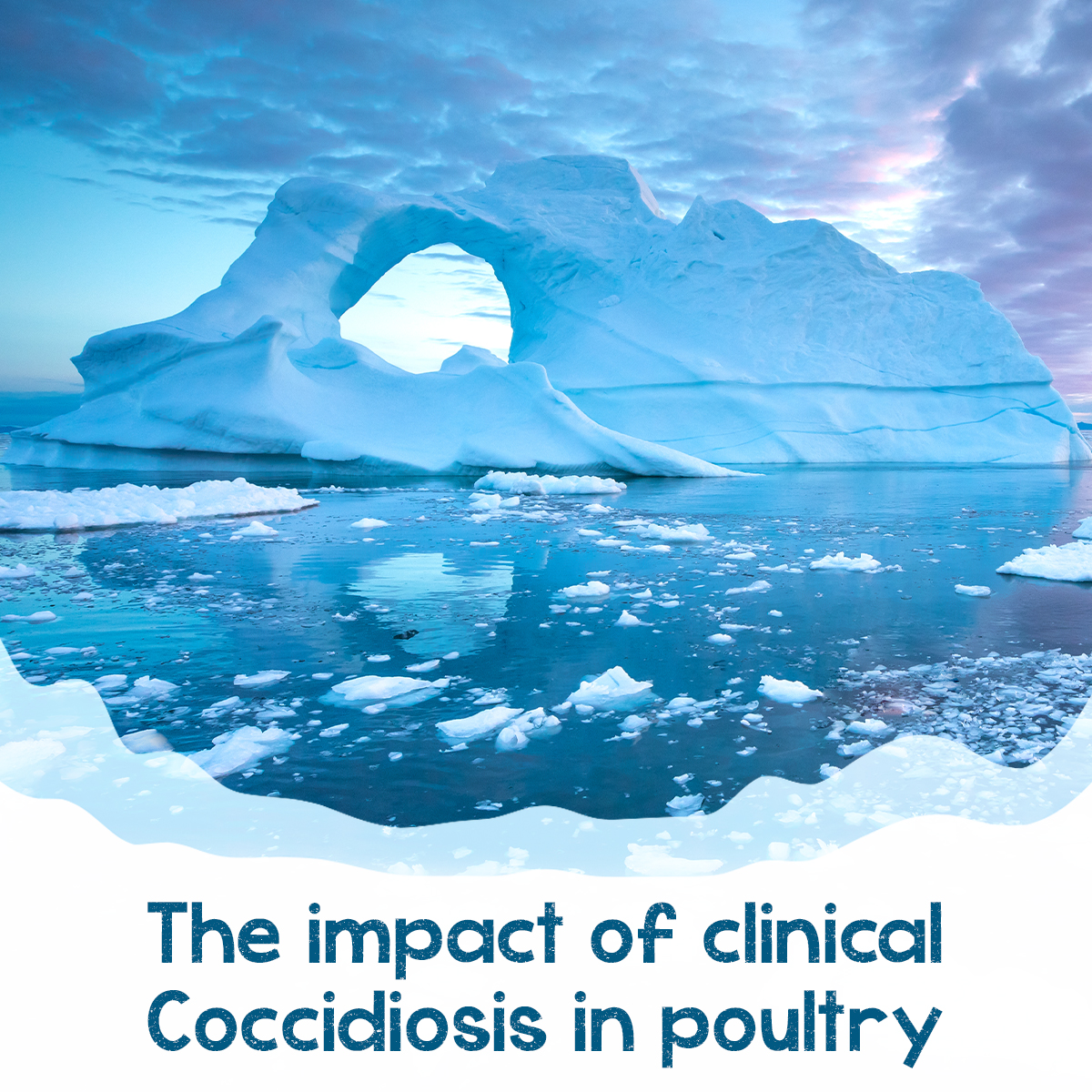 Clinical Coccidiosis in Poultry is Just the Tip of the Iceberg

Approaching midnight on a calm and moonless night of April 14th, 1912 somewhere in the North Atlantic a voice cried into the night “Iceberg right ahead”, it was the voice of lookout Frederick Fleet aboard the RMS Titanic. We are all very familiar with the tragic story that follows, and the fate of the ‘unsinkable’ Titanic is written into folklore. Questions abound to this day about how the disaster could have happened and what could have been done to avoid it. A simple step might have been to arm the lookouts, posted to the crow’s nest specifically for the purpose of spotting icebergs with binoculars. When questioned at the subsequent enquiries if binoculars would have helped Fleet responded, “we could have seen it (the iceberg) a bit sooner” When asked how much sooner, he replied, “Well, enough to get out of the way” This of course is a matter of opinion, as iceberg wisdom tells us the true danger lies beneath the surface where up to 80% of its bulk sits. In fact, whilst the Titanic seemed to only graze along the side of the berg, sprinkling ice fragments on the forward deck they had no idea that it had in fact slashed a 300-foot gash in the ship’s hull below the waterline. But what has the Titanic and an iceberg got to do with Coccidiosis, well let me explain.

Discovered in the 1920’s Coccidiosis is a disease of the intestinal tract of animals caused protozoan parasites of the genus Eimeria, developing within the intestine of most domestic and wild animals and birds. Transmission from one animal to another occurs by consumption of sporulated oocysts in the faecal material or ingestion of infected tissue. The primary symptom is Diarrhoea, which may become bloody in severe cases. While coccidia can infect a wide variety of animals, including humans, birds, and livestock, infections are usually species-specific, albeit with the rare exception. Infections are common in farming environments where many animals are confined in a small space.

Coccidiosis is a significant disease in poultry and is widely considered the most economically important hosts of the disease. Why? Because more than 68 billion were farmed around the world in 2020, this represents over a third of all the meat produced during the same period, in addition to the 1.38 trillion eggs produced for human consumption. There are seven species of the parasite Eimeria that are recognised as infecting chickens these are E. acervulina, E. brunetti, E. maxima, E. mitis, E. necatrix, E. praecox and E. tenella. All poultry coccidia are species-related, meaning they only occur only in poultry and they are tissue trophic, which means they occur in particular areas of the intestine. Acute to chronic disease can occur in birds after 7 days of age.

That well-worn expression “tip of the iceberg” usually means, “you’ve only seen a small part of the whole thing.” Whilst clinical Coccidiosis in poultry can be fatal, it is that small part. This is worrying when you consider conservative estimates put an annual cost of clinical cocci to the poultry sector at some $2 billion. In its sub clinical form, it presents an even bigger problem (the rest of the iceberg) and this is perhaps why sub clinical Coccidiosis is considered probably the most economically important disease in poultry. Infected birds are asymptomatic – meaning they show no symptoms, but because the way the condition effects the intestinal tract it negatively impacts on weight gain, feed conversion rate and can even slow egg production. Whilst extremely hard to estimate how damaging sub clinical coccidiosis is to the poultry sector estimates have put this as ranging from $5 – 14 billion per annum.

Gut health is a crucial prerequisite for an economically viable poultry sector, in particular within broilers.  Subclinical coccidiosis is known to negatively impact feed conversion rates (FCR). This manifests itself in reduced or slower weight gain, as well as reduced egg production in layers. FCR is one of the major economic parameters used worldwide to estimate profit/loss in the broiler industry in particular. Reduced FCR has the immediate effect of increasing feed costs. Whilst other bacterial and viral diseases may get sometimes more ‘time in the spotlight’ because of the sudden nature of their impact and high mortality, subclinical coccidiosis causes maximum economic loss as it can exist undetected for extensive periods of time. Needless to say, it has a detrimental impact on the value of the flock, as well as the profit margin made by the poultry producer themselves.

A further impact of sub clinical coccidiosis is that it increases the potential for secondary infections, s damage to the gut wall makes it easy for more virulent challenges to take hold, like necrotic enteritis. Which will in turn increase medication costs and reduce the potential of the flock.

Prevention of Coccidiosis through a well-considered hygiene programme

Treatment alone cannot prevent the economic losses induced by cocci.  Therefore, a joined-up approach to biosecurity is required, one that combines veterinary support, feed-based additives and a strict cleaning and disinfecting protocol. The goal of cleaning and disinfection being to reduce the potential for orofecal transmission by killing the oocysts that may exist within the environment.

Many disinfectants are not effective against the highly resistant oocysts associated with Coccidiosis. OmniCox produced by Mirius is. It has been proven an effective aid in the prevention and management of both Coccidiosis and Cryptosporidiosis, as well as having proven activity against other excreted endoparasites.

Over the last 30 years we have developed a range of highly efficacious, biosecurity products. Our range of solutions are proven to help prevent and reduce the impact of disease on poultry and their keepers. We recognise good biosecurity not only improves overall flock health by helping to keep poultry diseases such as Coccidiosis out, but also improves productivity. However, in the event of an outbreak, Mirius manufactures a range of disinfectants that can be deployed to limit the spread of disease both on and off your premises. Products, such as OmniCox, Omnicide, Virucidal WP, WP20 and OmniChlor Plus will address the problem at hand, cut the costs of disease treatment and reduce potential losses, which will ultimately improve profitability.