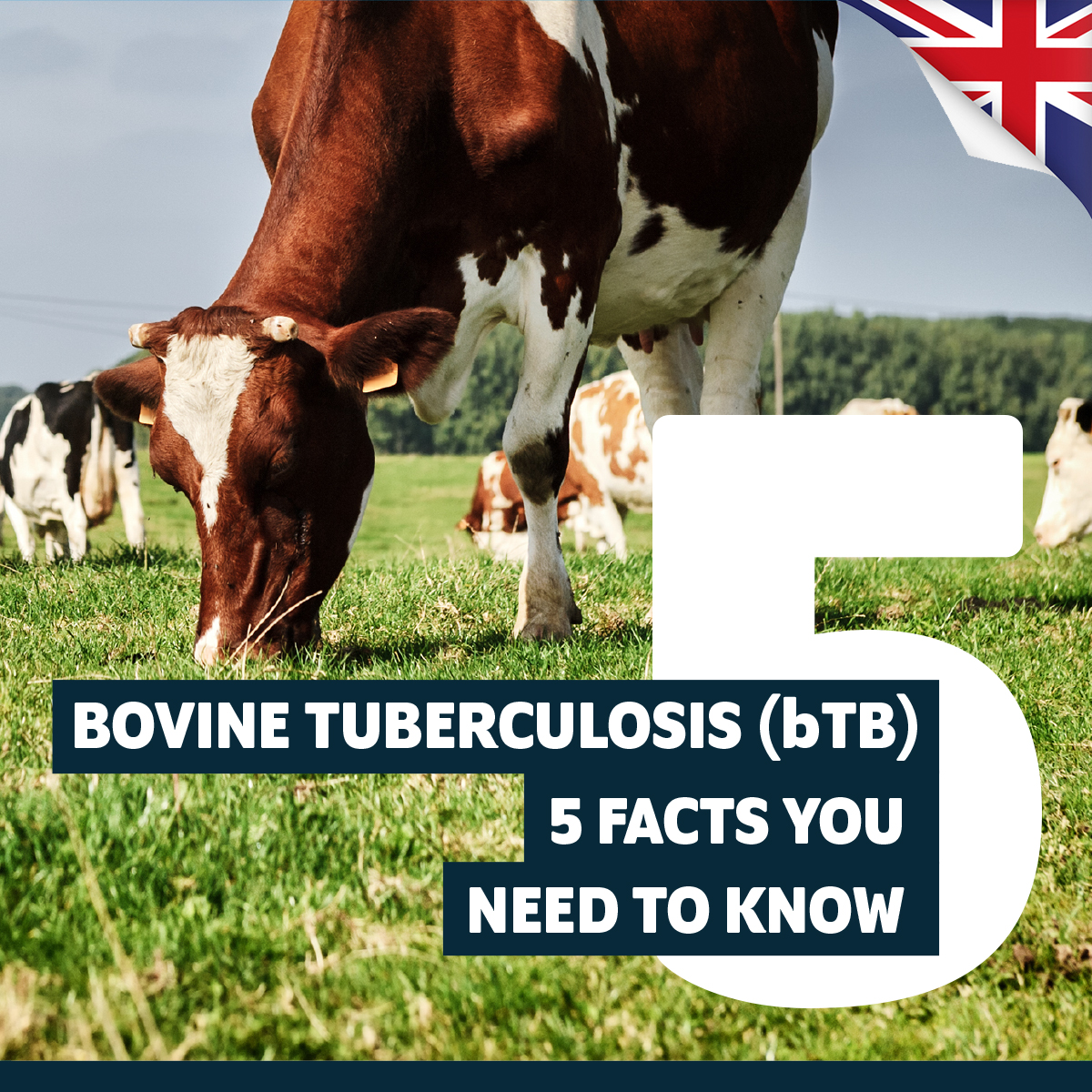 Bovine tuberculosis (bTB) is a global problem.  It has significant impacts on animal health and the potential to damage the economic well-being of individuals and communities. An outbreak of bTB can result in reduced milk yields, culling of herds, and restrictions on meat exports from affected areas. Global eradication targets of this chronic, bacterial disease are hampered by its complex epidemiology. Indeed, despite advances made in our understanding much of our knowledge of transmission mechanisms, diagnostics, control, and infection remains limited. So, what do we know about bTB and what, if anything, can be done to create a global Bovine tuberculosis free zone?

1.What is Bovine Tuberculosis?

Bovine Tuberculosis is an infectious disease. It’s called ‘bovine’ (which relates to cattle) because it mainly affects cows, although all sorts of mammals can contract the infection. A respiratory disease it causes a general state of illness, pneumonia, weight loss, and eventual death in infected hosts. Bovine Tuberculosis is caused by the bacterium Mycobacterium bovis, however other species of the M. tuberculosis complex (MTBC) such as M. caprae, M. avium or M. tuberculosis have also been isolated from infected cattle.

Bovine TB, is a zoonotic disease, meaning it is able to pass from animals to humans. However, the risk of human infection is considered to be very low for most people. M. bovis can also cause disease in deer, goats, pigs, cats, dogs and badgers. We will come back to badgers later.

Mycobacteria are considered unusual amongst bacteria due to their resilience, slow growth and the insidious nature of the chronic disease they cause. In brief, Mycobacteria are facultative intracellular ‘parasites’, meaning they can survive and even reproduce inside host macrophages – the very cells of the immune system that are meant to kill pathogens. Once inside the host tissue, Mycobacteria may become ‘walled off’ in small protective nodules within the lungs or skin. Mycobacteria also have a unique and complex bacterial cell wall, creating structural strength, resistance to attack and enhancing their survival chances outside of the host.

2.How does Bovine Tuberculosis spread?

Evidence of bTB is typically found in the lymph glands of the throat and lungs of affected animals. Infected cattle shed the bacteria in their breath or in discharge from the nose or mouth. The disease can be transmitted directly by contact with an infected host, be that a domestic or wild animal or indirectly by ingestion of contaminated material. Calves can be infected by ingesting colostrum or milk from infected cows. Cattle movements are also part of the problem. The course of disease is slow and it can take months or years to reach the fatal stage, during this time an infected animal can shed the bacteria within the herd long before the appearance of any clinical signs. Therefore, the movement of undetected infected domestic animals between herds is a way of further spreading the disease.

Humans can become infected by ingesting raw milk from infected cows, through contact with infected tissues at abattoirs or butcheries or inhaling bacteria breathed out by infected animals.

The subject of Bovine Tuberculosis, Cattle and Badgers is a contentious one, particularly in the UK. It is understood bTB is transmitted from cattle to cattle; from badgers to cattle and cattle to badgers; and badger to badger. This is known as the cycle of reinfection.

Links between badgers, cattle and bTB infection were first suspected in the early 1970s. Professor Sir John Krebs concluded in his 1997 report there was “compelling evidence” that badgers transmit bTB to cattle. It has also been suggested that the badger is the most important wildlife reservoir of bovine TB in the UK and it is involved in the maintenance and transmission of the disease to cattle.

To try to and answer definitively the question of whether badgers are to blame for TB in cattle, the UK government organised a study called the Randomized Badger Cull Trial. The consequent report published in 2007, stated that ‘badger culling can make no meaningful contribution to cattle bTB control in Britain’, and ‘recommend that bTB control efforts focus on measures other than badger culling’ The debate continues.

4.How is Bovine tuberculosis diagnosed?

The clinical signs of bTB are neither specific or distinctive and, therefore, prevent even the most knowledgeable veterinarians from making a definitive diagnosis based on clinical signs alone.

The tuberculin skin test is the standard method of bTB diagnosis in live domestic animals. It consists of injecting bovine tuberculin (a purified protein extract derived from M. bovis) intradermally and then measuring skin thickness at the site of injection 72 hours later to detect any subsequent swelling at the injection site. Alternatively, blood-based in vitro tests that detect the bacteria, antibodies or cell-mediated immunity are also currently, if not widely available. However, a definitive diagnosis can only be confirmed by bacterial culture and identification in the laboratory, a process that can take eight weeks or more.

5.Why not vaccinate cows, or badgers, against bTB?

Vaccination could play an important role in helping control bTB in the future. However, it is fraught with challenges. Firstly, there is no legal bTB vaccine currently available. That rather significant obstacle aside, vaccination will not work on any animal that already has bTB and no country in the world where wildlife carries the disease has eradicated it in cattle without also tackling it in wild animals too. A vaccination programme of this scale is impractical and probably cost prohibitive. In certain areas of the world (the EU) vaccination of cows is currently banned, why? Because the vaccine interferes with tuberculin skin test carried out to find out whether cows have bTB. In short, it is impossible to tell a vaccinated cow from an infected one. Whilst a test has recently been developed that can tell the difference, even when this has been fully developed, it will need to go through protracted and time-consuming international approvals  before being made commercially available.

Vaccines are not 100% effective. They are designed to generate an immune response that will protect the recipient during future exposure to the disease-causing micro-organisms. However, individual animal immune systems are different enough that in some cases they will not generate an adequate response – meaning the creature will not be effectively protected. For any vaccine program to eradicate a disease it is estimated that 80% of the target population are immunised and the vaccine is 60% + effective.

Scientists have concluded that vaccination has to be used in combination with other measures, which must include dealing with wild animal reservoir of the disease. In the UK these controls include:

Good biosecurity practices involve a multifaceted approach to addressing the problem at hand. In addition to regular testing, improved herd and site management the routine use of proven cleaning and disinfection products can play an important role in disease containment. By addressing the potential for environmental transmission, the risk posed to your herd by bTB or other bovine bacterial and viral diseases such as Foot and Mouth Disease (FMD) and Johne’s disease is further reduced. Over the last 30 years Mirius has developed a range of highly efficacious antibacterial and antiviral biosecurity cleaning and disinfecting agents designed specifically to improve hygiene in cattle centred environments.