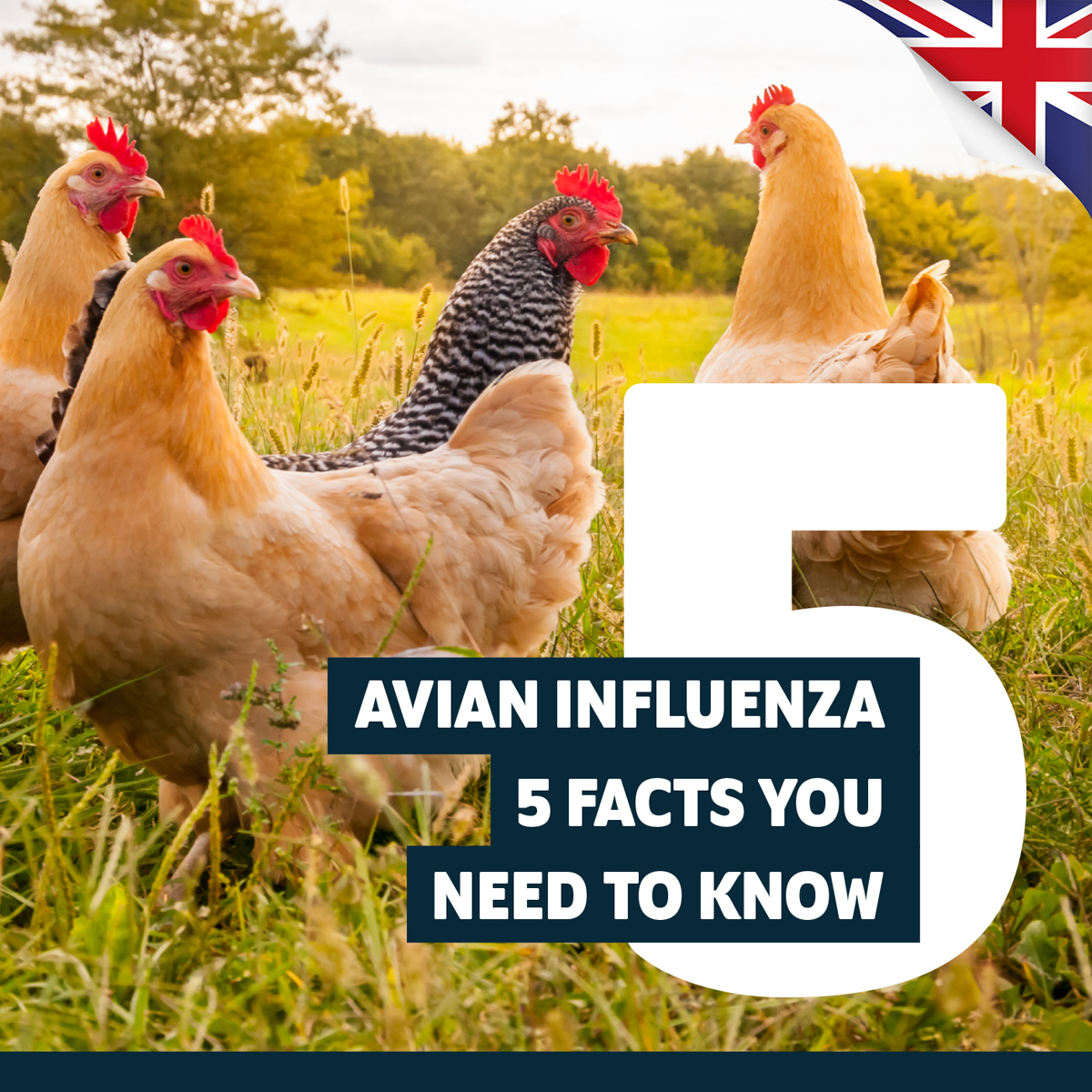 With an Avian Influenza Prevention Zone (AIPZ) currently in place across the UK all bird keepers, whether they have pet birds, commercial flocks or just a few birds in a backyard flock are required, by law to observe a range of strict biosecurity precautions. Whilst the risk to human health from Avian Influenza (AI) is considered “very low” by Public Health England, it is apparent the combined bird population of the UK and further afield is at risk. So, what do we need to know about this viral illness?

1. What is Avian Influenza (bird flu)?

Influenza is the name of the disease caused by members of the viral family Orthomyxoviridae. There are four types of influenza viruses A, B, C and D – some of which affect humans, many only affect animals, in particular birds. Avian influenza, or bird flu, is a term commonly used to refer to the many types of ‘A’ influenza viruses that usually only infect birds.

Most strains of bird flu are relatively harmless to their natural bird hosts and do not infect humans either, they are termed low pathogenic AI (LPAI). However, some avian influenza viruses that are low pathogenic to birds can be transmitted to humans and can in fact cause illness. An example of such is the A(H7N9) identified in China, in 2013. This strain is asymptomatic, causing no obvious or only mild symptoms in birds, however transmission to humans can cause severe disease, potentially even death.

Other avian flu viruses are referred to as highly pathogenic. Those viruses cause outbreaks in poultry farms and other commercial bird populations resulting high morbidity and mortality rates in affected poultry. Examples of such avian influenzas are A(H5N8) – the strain responsible for the current control measures in place in the UK and A(H5N1). Importantly, the term ‘highly pathogenic’ is not necessarily related to the disease in humans. Many of these avian viruses do not cause disease in humans or are known to only cause mild disease. Some, however, such as A(H5N1) can cause severe disease when transmitted to humans.

Any detection of avian influenza viruses of the H5 and H7 subtype in poultry holdings should be notified and precautionary measures applied to prevent potential avian-to-human infection.

Domesticated birds (chickens, turkeys, etc.) can become infected with avian influenza A viruses through direct contact with infected wild birds, other infected poultry, or through contact with surfaces and equipment that have been contaminated with the virus.

The infection of poultry with LPAI viruses may cause only mild signs of disease (such as ruffled feathers and a drop in egg production) and go undetected. However, infection of poultry with high pathogenic avian influenza (HPAI) viruses can cause severe disease with high mortality. HPAI virus infection in poultry (such as with HPAI H5 or HPAI H7 viruses) can cause disease that affects multiple internal organs with mortality up to 90% to 100%, often within 48 hours.

Both HPAI and LPAI viruses can spread rapidly through flocks of poultry.

4. Avian Influenza is a Zoonotic disease.

A zoonotic disease is a type of disease that passes from an animal or insect to a human. A zoonotic disease or zoonosis can be caused by a virus, bacteria, fungi, or a parasite. Zoonotic diseases spread by mosquitos and ticks are some of the most serious infections in humans, examples being malaria and Lyme’s disease.

Zoonotic diseases can be transmitted in various ways: through the air, by eating contaminated meat or produce, through close contact with an infected animal, by touching an area or surface that an infected animal touched and through insect bites.

5. What can be done to prevent outbreaks of Avian Influenza in Poultry

Because of the potential for the avian influenza virus to survive in the environment coupled, strict biosecurity measures and good hygiene are essential in protecting against disease outbreaks within poultry flocks. Measures should include:

The final recommendation is something Mirius can help with. Over the last 30 years we have developed a range of highly efficacious, antiviral biosecurity products. Our range of solutions are proven to help prevent and reduce the impact of disease on poultry and their keepers. We recognise good biosecurity not only improves overall flock health by helping to keep poultry diseases such as avian influenza out, but also improves productivity. However, in the event of an outbreak, our products can also be deployed to limit the spread of disease both on and off your premises. That is why they are included in the list of disinfectants approved for use by Defra in England, Scotland, and Wales. Products, such as Omnicide, will address the problem at hand, cut the costs of disease treatment and reduce potential losses, which will ultimately improve profitability.