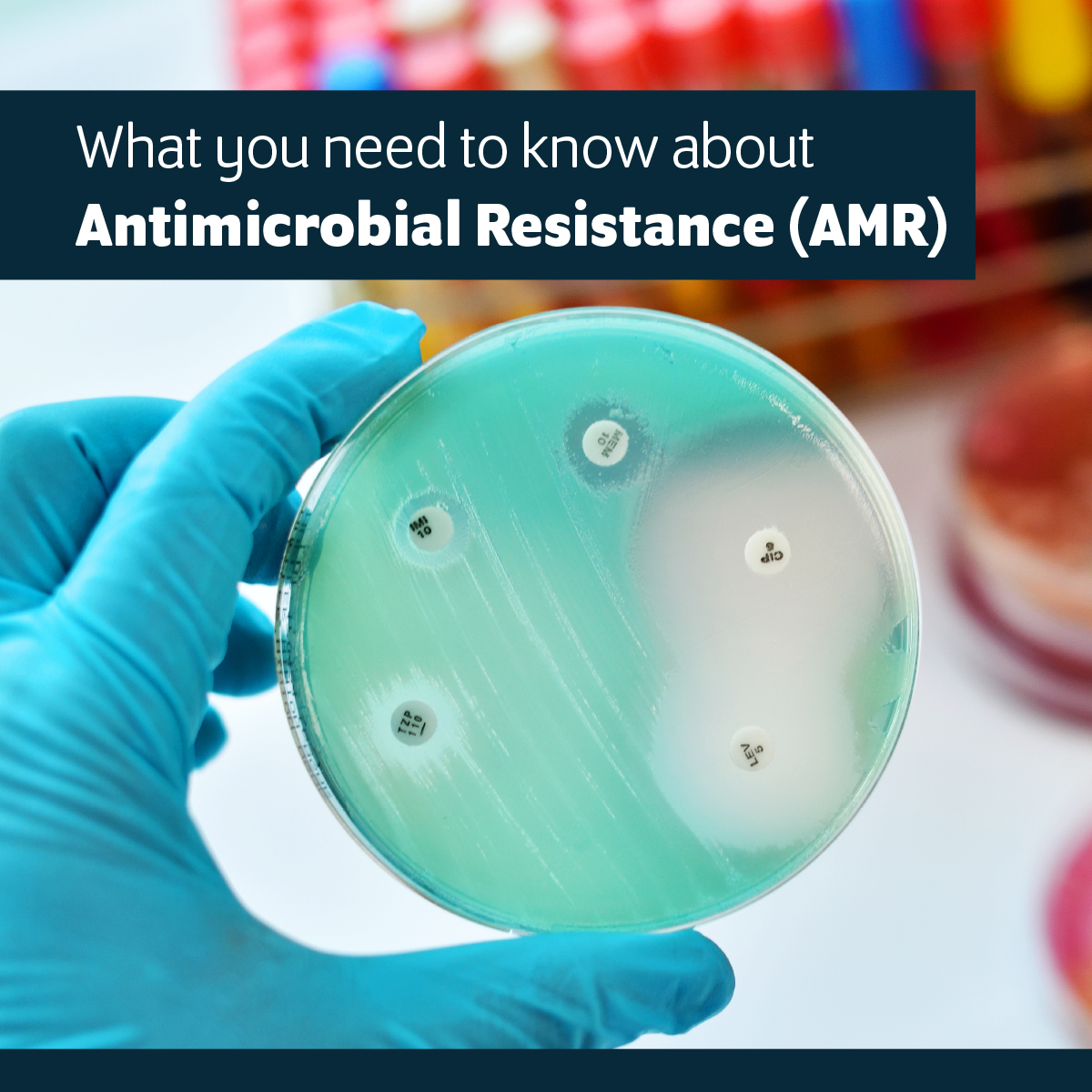 Antimicrobial Resistance or AMR is an issue of enormous concern. It is a global healthcare crisis waiting to happen, or according to the World Health Organization is happening now and ‘has the potential to affect anyone, of any age, in any country’. Antimicrobial Resistance presents a threat to mankind’s future safety and prosperity on a scale that could dwarf the impact of the Coronavirus Pandemic. If we do not heed the advice of bodies like the World Health Organisation (WHO) and act now to tackle the threat it presents, we could face many more Corona-like crises in the future. So, what are the facts about Antimicrobial Resistance, what is it, how does it occur and how do we respond to the threat it poses?

What is Antimicrobial Resistance (AMR)?

Antimicrobial resistance is an evolutionary response in bacteria to exposure to antibiotics. Occurring naturally over time, it was in fact predicted by the very man who discovered and pioneered the use of antibiotics, Alexander Fleming.  AMR happens when bacteria adapt or change in ways that mean they acquire the ability to resist the antibiotics that were designed and administered to treat them. AMR is a major concern because infections caused by antibiotic-resistant bacteria such as Methicillin-resistant Staphylococcus aureus (MRSA), Clostridium difficile (C.diff), Multi-drug Mycobacterium tuberculosis (MDR TB) can kill their hosts and spread to others imposing huge economical and emotional costs on individuals and entire communities.

What are the mechanisms of AMR?

There are 3 main ways by which bacteria can become resistant to antibiotics.

Why is AMR such a threat?

Approximately 700,000 people around the world die annually from antibiotic-resistant infections. Without effective treatment, infections that have been treatable for decades could, once again, cause widespread death and suffering.  A UN report has shown that if left unchecked, AMR could cause as many as 10 million deaths around the world per annum by 2050.

What is the economic cost of AMR?

It has been estimated that the economic cost of AMR through lost production globally could be $100 trillion between now and 2050. The Centre for Disease Control estimates the annual bill for AMR runs at $55 billion every year in the United States, $20 billion of which is attributed directly to additional healthcare costs, whilst a massive $35 billion is the cost of lost productivity. It is not just the developed world that will suffer. It is widely anticipated that the direct and indirect effects of AMR will disproportionately and negatively impact low and middle-income countries, further compounding the problem.

How does AMR spread?

As COVID-19 has illustrated so very perfectly, microbes know no borders.  Our lives are so interconnected, not just with other humans, but animals too. Each interaction provides the opportunity to exchange pathogenic and non-pathogenic bacteria, with or without resistance to antibiotics. These bacteria are then able spread into the environment though different routes. It is therefore easy to understand how antimicrobial resistant organisms are found in people, animals, food, plants, and the environment (in water, soil and air). 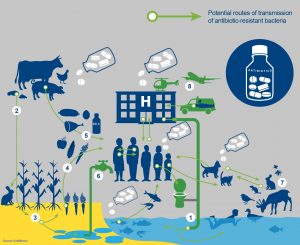 What are the main drivers of AMR?

Humans are a key driver in the onward spread of AMR. The inappropriate and unregulated use of antibiotics has accelerated a process that was already happening. Antibiotics are often used unnecessarily, or outside of prescriptive guidelines, which simply increases the potential for bacteria to become resistant, survive and multiply.  Poor infection prevention & control practices, globalization and international trade also contributes to the spread of AMR.

People and animals can share the same bacteria, with over 60% of infectious animal diseases being transmissible to humans. Food animals are known to serve as a reservoir of antibiotic-resistant bacteria. Antibiotics are commonly used in animal husbandry and veterinary medicine for disease prevention and treatment, they are also used for non-therapeutic purposes including growth promotion. In many instances these very same antibiotics are prescribed in human medicine – including many drugs classified by WHO as “critically important to human health”. From within a herd or flock resistant bacteria can spread to other animals and humans directly by contact and indirectly via the food chain, water, air, and manured-fertilized soils. It is claimed the ‘cheap meat’ demanded by consumers is only possible, because of the profligate use of antibiotics in agriculture.

Poorly controlled farming and aquaculture activities, as well as poor sewage and wastewater management practices, can lead to the spread of AMR. Resistant bacteria have been recovered from many water sources including essential drinking wells in desert regions, rivers and effluents from wastewater treatment plants.

How is the world responding to AMR?

We have a significant healthcare challenge on our hands. So, what is being done? Clearly limiting the emergence of antibiotic resistant microorganisms should be a a global priority. A problem of this magnitude requires a global, harmonised approach (unlike the world’s response to COVID-19) that enables the coordination of medical, animal health and environmental policy. This is the foundation of the ‘One Health’ concept, as articulated in a series of action plans, as follows:

As long ago as 2015, the World Health Assembly endorsed The Global Action Plan on antibiotic resistance. Surveillance is a cornerstone of the plan and it is supported by the Global Antimicrobial Resistance Surveillance System (GLASS). An action plan that underscores the need for coordination among numerous international sectors and actors, including human and veterinary medicine, agriculture, finance, environment, and well-informed consumers.

Three notable bodies, the FAO (Food & Agriculture Organization), the OIE (World Organisation for Animal Health) and WHO (World Health Organization) have formed a Tripartite Collaboration on AMR. This collaboration is providing leadership by developing a Code of Conduct to reinforce the implementation of international standards on responsible and prudent use of antimicrobials.

Alongside global initiatives individual countries are being urged to develop national AMR action plans. These should reflect the five strategic objectives outlined in the Global Action Plan including: improved awareness; surveillance; infection prevention; optimal use of antimicrobials; and sustainable investments in the AMR response,

A world without effective antibiotic medicines is perhaps not difficult, but awful to imagine.  Infections like pneumonia, gonorrhoea and tuberculosis are set to become uncontrollable. Some of the commonest childhood diseases will become difficult to treat, if not untreatable and thus re-emerge. Routine surgery will no longer be routine. Lifesaving treatments and invasive medical procedures will become less safe without effective antibiotics to protect against infection. Without effective antibiotics farmers and the food industry will lose effective drugs to treat sick animals, which will impact the food supply chain as well as family and community livelihoods. Livestock workers will be exposed to animals carrying transmissible, resistant, and therefore difficult to treat bacteria. This scenario is potentially catastrophic.

Redundant antibiotics are being reengineered or replaced with new, effective medicines – but the process is very slow and uncertain – scientifically and financially. Alternative strategies are required. One of these is prevention first. Every infection prevented is one that needs no antibiotic treatment. Prevention of infection by limiting the potential for the survival of disease-causing microbes is cost effective and can be easily implemented in all settings and sectors, even where resources are limited. Good sanitation, improved hygiene and other infection prevention measures that can slow the development and restrict the spread of difficult-to-treat antibiotic resistant infections are a logical choice.

Biosecurity products like those manufactured by Mirius are proven to control and prevent the growth of disease-causing microbes, be they bacterial, viral, fungal or protozoal. We provide a family of UK manufactured detergents and disinfectant products to the farming, medical, and food sectors in over 80 countries worldwide. Mirius is committed to being the number one choice for disease prevention and control solutions; driving innovation within the cleaning and hygiene industry and addressing challenges such as Antimicrobial resistance.